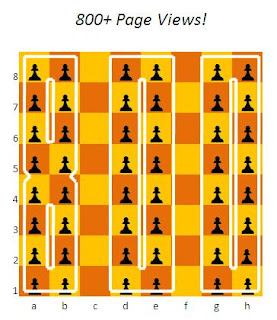 More views than I thought I'd ever get ;)
Posted by Hazel Smith at 11:13 PM No comments:

CHESS 'N MATH JUNIOR UPDATE
--> 89th Montreal Open Championship
--> Seprember 11-13, 2009
--> PROMOTION! Every youth in the Chess 'n Math Association with CMA rating over 900 who has never participated in a "slow" game rated tournament is invited to play for free. An additional $105 prize + certificate will be awarded to the girl with the top score in the
tournament.
--> Note: This tournament is rated by FQE (Quebec's chess association). You will need to buy a membership at the tournament or online.
--> Register at http://paiement.championnatdemontreal.mine.nu/, and make sure to include “Chess’n Math invites me for free!” in the comment line.
--> tournament post: http://members4.boardhost.com/chess-math/msg/1250859489.html
--> tournament info: http://www.championnatdemontreal.mine.nu/
Posted by Hazel Smith at 11:51 AM No comments:

White to move, Mate in 2 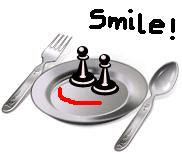 After travelling to the US for the weekend, my mom came up with this joke (and she's not even a chess player)!

Where do chess players go to eat (in the US)?
"Pawn"derosa!

(one of my favourite places to eat in the US is a restaurant chain called Ponderosa...cute joke)
Posted by Hazel Smith at 11:03 AM No comments:

Two more libraries will host the Chess in the Library program starting in October and January.

See http://michaelkleinman.blogspot.com/ for more details!
Posted by Hazel Smith at 11:00 AM No comments: