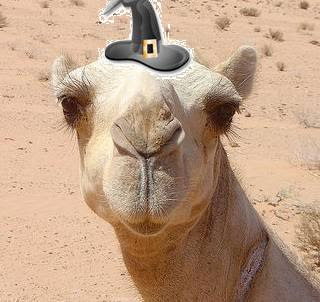 Please read my past camel posts before reading this one.

It had been nearly a week since the two camels' last encounter with Oscar. Days had gone by slowly, yet the warm humidity kept the camels alert on their search for the mysterious Ma'at tournament. Once again, they were starting to lose hope.

"What's the point, Gamalo? We've been walking day in and day out through this desert. Even camels cannot go on forever without food. Maybe we should head home."

"Gamala, are you really thinking of giving up now? At this point, there's no guarantee we'll even find home in time to eat."

"That's ridiculous...this is all your fault. We had a good life, a good home, and you fooled me into looking for some game we don't even know how to play. It must have been a hallucination all along."

"And yet you came with me. Did you not have some interest in this game yourself?"

"That was last week. This is now. Let's cut our losses and head back home. Can't you see, it's the only viable choice we have left. I'm completely exhausted."

Gamalo started thinking about what Gamala had said. There was definitely some truth. Getting lost in the desert was like getting lost in a never-ending cornfield on the other side of the world. No matter how hard they tried, every step looked the same, yet felt foreign. Even so, Gamalo saw something intriguing about the game of chess, the Ma'at tournament, and something told him to continue on.

Slowly, Gamalo trodded off. With teary eyes, Gamala headed the other way. Her heartfelt goodbye faded in the desert wind.

"Yes, you! What a lovely camel. Please, I need your help."

Gamala turned around. A familiar face smirked. It was Oscar's opponent.

"Look, I don't know if you can understand me, but my name is Mansur. I am a chess player. I saw you watching some of my games. You must be a very smart camel. Trust me, if you give me a hand...I mean hoof...I will give you all the luxuries you will ever need, and you won't be lost anymore."

Gamala had no idea how he knew she was lost, or how he found her, but she sensed a kind of sincerity. She gently bowed her neck as Mansur approached. She wanted to show him full devotion. In her head, she envisioned all the luxuries he promised. Maybe a pearl necklace or two. Just imagine what it would be like around her neck.

Suddenly, the same neck she visioned enrobed with jewels felt stiff. No, it certainly was NOT a necklace. It was a huge metal chain, and there was no way to escape! Without hesitation, Mansur began to pull her away.

What do you think will happen to Gamala? Leave your comments below!

Did you know? A camel's hump is really "a giant mound of fat", allowing it to live without food for up to two weeks!

Gamala? Gamalo? These names were chosen based on the Arabic word "Gamal", meaning camel. Learn more Arabic words on this website:

My favourite is "wahda wahda" (slow down), though "ahlan" (hello), "shukran" (thank you), and "feen el-hammaam?" (where is the toilet?) may be more useful! I also find it interesting how some sayings have both male and female versions. Isn't it fun learning about different cultures?

Note: the site above is great because it's understandable for English-reading viewers, but it is mainly for learning to speak like an Egyptian, not write like an Egyptian!

Mansur? Ever wonder what names like this mean? Visit this site:

Enjoyyyyy!
Posted by Hazel Smith at 9:22 PM No comments: