Sixty-four squares to save the world! 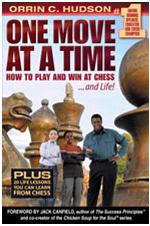 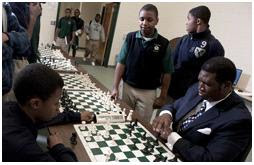 (Photographs: Top, by Be Someone, Inc. Bottom, by Kevin Garrett)

Seeing chess in a new light...

Chess is often mistaken as a game solely of winners and losers. As soon as the king falls, or the clock ticks down, the game is over - and we simply move on. Does chess have to be seen this way?
Orrin "Checkmate" Hudson would disagree. Growing up in foster care with twelve other children, Hudson struggled to excel in school and life. He stole tires, joined the wrong crowd, and like other at-risk children, faced the possibility of jail, poverty - even death. He could have given up. He could have dropped out of school and vanquished all hopes. Instead, he graduated as an outstanding student and went on to start his own business. What turned his life around?

At the age of fifteen, Hudson's high school English teacher, James Edge, introduced him to chess. He was told to make the right moves and become a better person. The chess board became his visual aid to help him overcome the obstacles in his life.

After winning a couple prestigious tournaments, Hudson realized that good choices pay off. As a tribute to saving his own life, he sold his business to found Be Someone, a crime prevention program using chess for education. Since then, he has held seminars and workshops for close to 20,000 disadvantaged and at-risk youth, helping them turn away from crime, guns, and drugs, and instead realize their true potential. Hudson offers enthusiasm and a $1,000 incentive for any youth who can defeat him at chess. Furthermore, his programs help students' presentation, vocabulary, and networking skills, among others.

Mission of Be Someone: To build character, hope, and inspiration so that kids can set and achieve lifetime goals, realize their full potential, and Be Someone.

Hudson sees parallels in chess and life. He believes, through chess, people can learn that every move has a consequence. "Think about the board. The king, the pawn, the bishop, the rook, the knight, and the queen: They all have their unique combination of power. Their purpose is to stay in their lane and do what they do best." (Orrin Hudson, as quoted by Karen Leland) In other words, pieces must work together despite their "social" differences - which in life could be gender, race, academic achievement - and find the right combination.
From Hudson's viewpoint, chess can be a game in which everyone wins - and not just at the board, they win at life! The ability of chess to transform a routine of crime and drugs into a life of achievement and success makes it one of the most powerful games in history. If only people would follow Hudson's steps, and channel positive energy through chess, the world could become a better place for all.
As we reflect on our beautiful country of Canada - one that values culture, freedom, and prosperity - surely this article is worthy of careful consideration. As a way to show my positive spirit, I have compiled three top ten lists based on my research. Enjoy!
Top 10 Orrin Hudson Quotes
1. "Make every move count."
2. "Think it out, don't shoot it out."
3. "Win by choice."
4. "Push pawns, not drugs."
5. "KASH - Knowledge, Attitude, Skills and Habits - over cash."
6. "You're always in a race between disaster and education. If you get the education, you can prevent the disaster."
7. "When you play chess, all your pieces have a clear purpose. Just like in life. You have to make sure you make the right move at the right time."
8. "When you do noble things, you help out other people and society and it makes you feel good. It is a win-win situation. When the person you help out is a child that has a full life ahead of them the results of your efforts can return to society exponential rewards."
9. "Surround yourself with smart players who can make you better."
10. "Evil prevails when good people do nothing."
Top 10 Lessons People Can Learn From Chess
1. Character
2. Self-esteem
3. Respect
4. Responsibility
5. Structure/Discipline
6. Thinking/Problem-solving
7. Concentration
8. Community
9. Patience
10. Sacrifice
Top 10 Results of Learning Chess
1. Ability to set goals (and see "losing" as a valuable asset for future improvement)
2. Better grades
3. Longer attention span
4. Strategic thinking
5. Positive competition
6. Teamwork/cooperation
7. Etiquette
8. Motivation
9. Inspiration
10. Expanded world view
Hudson's non-profit organization:
Be Someone, Inc., founded 2001
http://www.besomeone.org/
Hudson has received many leadership and community service awards. He also graduated as Most Likely to Succeed and Outstanding Student in his senior year.

His life story and his book ("One Move at a Time", which teaches readers how to go for "The Big Win" of moral development) have been featured on numerous news stations, television/radio networks, periodicals, magazines, and websites, including Good Morning America, USA Today, People magazine, and CNN.
Hudson's goal is to reach out to one million children, one move at a time.
Thank you to Lexus Magazine for advising me of this story. Here is Karen Leland's article: https://secure.drivers.lexus.com/lexusdrivers/magazine/content.do#:/pub-share/magazine/html/Lexus-Lifestyle/Orrin-Hudson.html
Other websites used for research & quotes:
http://www.besomeone.org/
http://www.chess-coach.net/index.php/2009/07/17/be-someone-founder-orrin-checkmate-hudson-claims-victory-at-37th-annual-world-open-chess-tournament/
http://romenews-tribune.com/view/full_story/7698033/article-Chess-player-Orrin-Hudson-uses-game-to-teach-values?instance=home_news
http://www.usatoday.com/news/nation/2004-06-15-chess-teach_x.htm
http://goddesschess.blogspot.com/2009/07/chess-mentor-orrin-hudson.html
http://www.insearchofheroes.com/internet-heroes/pages/Orrin%20Hudson%20hero.html
Posted by Hazel Smith at 3:15 PM No comments: