Looking for a change? I thought up some fun chess variants for you to try today!

1) Triple Queens: The rooks are flipped over to become queens at the start of the game.

2) Confusion: For a confusing game....bullet/blitz game where rooks act like queens, and queens act like rooks, bishops act like knights and knights act like bishops....trust me, it's not as easy to break out of habits as you think, especially when pressed for time.

3) Special Capture: Captures are only allowed if you have at least two pieces attacking.

5) What, NO castling???????: No castling allowed. Extension of the game could also include no en passant, no promotion, ...

More chess variants can be found at: http://en.wikipedia.org/wiki/Chess_variant
Posted by Hazel Smith at 12:05 PM No comments: 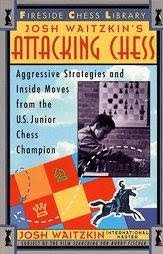 Attacking Chess: Aggressive Strategies and Inside Moves from the U.S. Junior Chess Champion
by: Josh Waitzkin
When I first ordered this book, I was more attracted to the title than anything else. However, when I started reading, it was unlike any chess book I've read before. Simple, clear diagrams....detailed insight into key moves...and super easy to follow! I didn't even need to set up a board to follow along. Contains a variety of chess themes, and a look into the life of a chess champion. Great for all ages.

The beautiful Chess in the Library website is up and running. Please take a look:
http://www.chessinthelibrary.com/

All credit to Yutong, Yuanling, and the rest of their website team!
Posted by Hazel Smith at 12:46 AM No comments: