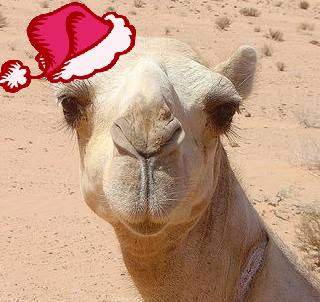 Last week: The camels discover the game of "chess".
This week:
The camels approached the two men, who seemed to be concentrating quite intensely on a small board containing little "statues". Some were short, and some were tall. Some were round, and some had sharp creases. Some even looked like the camels themselves!
As the camels neared, one of the men picked up a "statue" and moved it to another location on the board, all the while exclaiming "Check!". The camels were confused. They didn't know what this meant. The game seemed very peculiar, yet intriguing.
The other man made a move. He seemed concerned as he picked up a "statue" resembling a pharaoh. He didn't move it a long distance. The man looked around the board, left, right, then left again. He placed down his pharaoh and looked to his opponent. The camels knew the end must be near.
Without hesitation, the opponent, who the camels called "Oscar"(due to his scruffy long beard and his serious, almost menacing, facial expression) grabbed a tall "statue" and moved it right adjacent to the pharaoh. He yelled out "Checkmate!".
Grieved, the other man once again looked left, right, and then to Oscar. He slowly put out his hand and Oscar shook it. The two smiled, and set up the board to play again.
Just as the camels were about to approach even closer, the two men started a discussion.
"You know, I don't know why chess isn't popular anymore. It used to be so well-known", said the one man
Oscar sighed. "Hasn't anyone explained this to you? There's only one problem with this game..."
"A problem? Whatever could it be?"
"Something you'll eventually find out. It's a fantastic game, yet..."
...to be continued!!!
What do you think will happen next? Feel free to comment below!
Posted by Hazel Smith at 2:40 PM No comments: